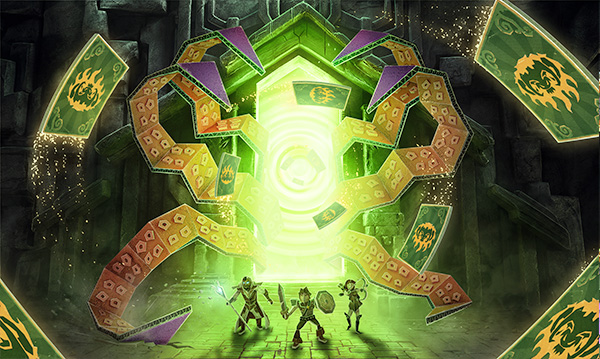 Hellcard is a cooperative roguelike deckbuilder that can be played in both Singleplayer and Multiplayer modes. The game takes place in the paper dungeons known from Book of Demons, but its main mechanics revolve around deckbuilding and fast-paced tactical turn-based card battles.

What makes HELLCARD unique and different from games such as Slay the Spire is that monster placement actually matters and can be used to your advantage.

In HELLCARD we’re planning to support co-op battles with up to three heroes facing Archdemon’s hordes. You’ll be able to descend into the dungeons solo, recruit computer-controlled companions or join your friends or strangers in their battles against the hordes of hell.

If the above features get you excited, be sure to wishlist the game now on Steam. Otherwise consider wishlisting anyway – who knows, maybe we will get you excited along the way!

Return 2 Games is a series of unique mid-core games inspired by the golden days of PC gaming. Each R2G title is a tribute to a single hit game from the ’90s: a reimagining of a single universal story for a brand-new audience, using modern means and innovative, often vastly simplified gameplay mechanics.

HELLCARD internally started as an idea for a new game mode inside Book of Demons (the first game in the R2G series), but we soon realized that it’s a much bigger design and that it should be executed as a separate stand-alone spin-off game. If you want to learn more about Return 2 Games or support us in the development of the series, visit the Supporter Pack store page. On release, HELLCARD will be a part of it.

Book of Demons, the first part in the series is already here, be sure to check it out as it includes a free demo.

Also, be sure to check out Book of Aliens, the second book in the series and a tribute to MicroProse’ UFO: Enemy Unknown that’s also in the works: